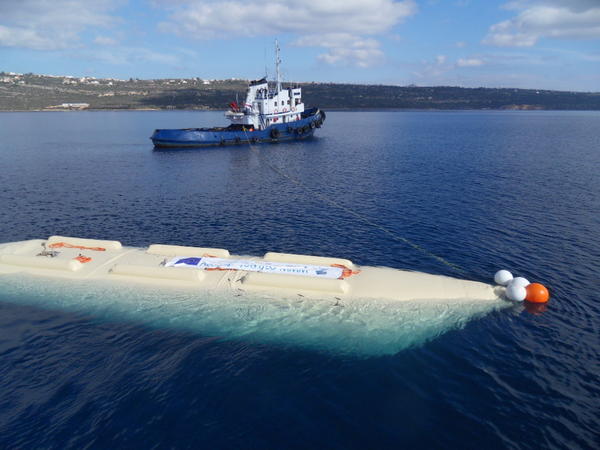 Futuris producer Denis Loctier introduces us to an innovative and inexpensive method of transporting fresh water to areas of drought or disaster, such as earthquakes: “Fresh water is abundant in some areas of our planet, and scarce in others. Of course we can transport fresh water by sea, but that’s expensive. Can we make it affordable? Here in Spain, engineers from a European research project are getting ready to test their solution.”

After two days of filling with fresh water an immense floating container is ready for its first journey on the open sea. It’s solid enough to walk on, but also flexible, so the waves lapp around and over it.

Samuele Ambrosetti is an Industrial innovation engineer with D’Appolonia: “This is a waterbag, a flexible container to transport drinking water by sea. It’s made of a highly resistant and watertight textile material. Its modules are joined together with a zipper which is very strong and waterproof.”

The zippers make it easy to combine individual segments to make the bag as large or as small as necessary.

Gianfranco Germani the general manager at Ziplast explains:
“The seam is specially designed to make this bag fully modular. It consists of two layers of material sealed like a sandwich inside the textile surface of the waterbag. In the middle of the zipper there is a polyurethane membrane which guaranties a waterproof seal.”

The prototype contains 2000 cubic metres of fresh water – that is 2000 tons of weight. The engineers need to make sure that the zippers do not burst when this heavy bag is towed at full speed on the rolling sea.

Jaroslav Demuth a fiber optics engineer at Safibra tales up the story: “So, here is the fiberoptic sensor inside. The sensors follow the tanks, so we can see the deformation of the tanks, and if there are some big waves or the speed is too high we must inform the captain.”

How can this technology be of use?

Josep Lluis Curto a polymer chemist and XXL–REFRESH project coordinator “It was developed mainly to transport water from zones where it’s abundant to relatively close areas that experience a short-term need of fresh water, such as a massive influx of tourists in the summer season for example. It can also allow to provide response in emergency situations.”

The test is a success the waterbag holds up well behind the tugboat. It naturally floats on the surface, since it’s filled with fresh water which is lighter than the salty seawater.

Jaroslav Demuth again:“We see some signals, some waves. When the captain speeds up the boat we can see there’s higher stress on the tank, but still it’s within the limits.”

The engineers estimate that this method is twice as cheap as water tanker deliveries and all that with a lower environmental impact.

And unlike tankers, the waterbag can be simply unzipped after returning to dock then folded and stored in a container.

Gianfranco Germani continues:
“Our next intention is to increase the waterbag capacity tenfold or twentyfold, and to make it sail autonomously, navigating by satellites.”