AUSTIN, Texas — The Army Software Factory, the Army’s newly launched effort to train a select cadre of Soldiers and Army Civilians in modern software development, is frequently recognized for its innovation, tech collaboration and future-oriented approach but is equally defined by the enthusiasm of its rising coders.

Participants in the Austin-based program, who are selected through a competitive application process, arrive from all over the country to learn the essentials of coding, app development, platform management and user design – all in a concerted effort to build a stronger, more agile Army.

Many of the current participants were drawn to apply to the Software Factory in part because of its unique model, which offers the ability to transform an individual with no previous experience in software development to an advanced software developer within the span of three years.

The program — which welcomed an initial, 25-person cohort in January and a second, 30-person cohort in July — begins with immersive classroom learning but quickly transitions to peer mentor-paired training. During this second, hands-on phase, participants learn the ins and outs of software development from experienced tech industry partners while working in small teams to tackle real-life projects for Army clients.

While the initial cohorts have yet to reach later stages of the program, the plan is for students to gradually attain a level of knowledge that allows them to assist in training new Software Factory members, creating a learning and growth framework that embraces the program’s motto of “By Soldiers. For Soldiers.”

With the Software Factory already preparing to welcome its third cohort in early 2022, we sat down with some of its second cohort members earlier this month to learn more about their motivations for joining the groundbreaking program, as well as to hear about their experiences thus far.

Below are some of the insights they shared, which highlight not only how the Software Factory is molding Army leaders, but how current software development efforts are helping to shape future tech readiness at the tactical edge. 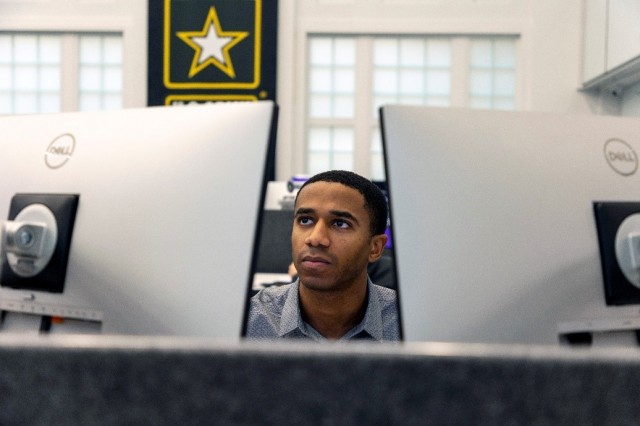 Cpt. Keyshawn Lee, 26, joined the Software Factory because he “wanted to be a part of something trailblazing, something that can really drive change,” he said.

He was working as a human resources officer at Fort Carson, Colorado, when he found out about the chance to join the program’s second cohort.

Lee, who grew up in a military family, was motivated to apply because he saw how advancing software resources could improve Army systems as a whole, with potentially life-saving implications.

In terms of the immersive classroom learning phase of the program, “it was everything I expected,” Lee said. “It was fun, I learned a lot, and it was very applicable being able to learn it and then implement it right then and there.”

Lee particularly appreciates the teamwork emphasis of the program and the support of his colleagues at the Software Factory; “they motivate me to do better,” he said.

He looks forward to applying skills he has learned thus far in the program with his own background knowledge — including project management insights gained through his master of business administration degree — when delving into projects for Army clients.

“I really want to continue to step outside my comfort zone and just really learn to make great products to help our Soldiers,” Lee said. 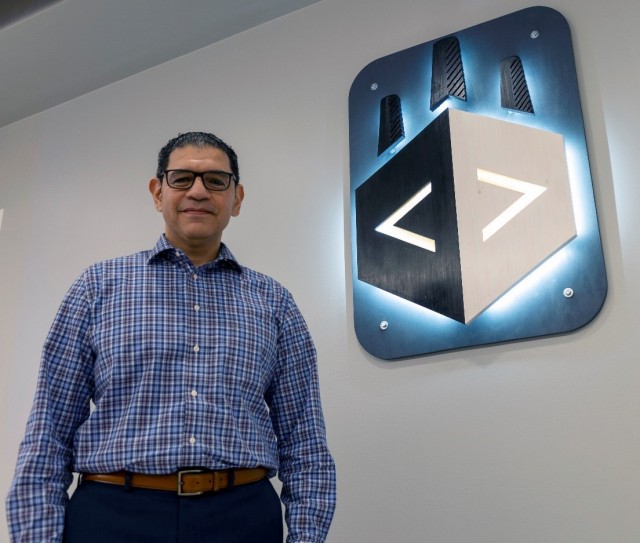 Cpt. Ammar Masoud, 47, is not new to the world of coding, having previously worked for a software development company in the private sector, but he is nevertheless thrilled to be learning new software skills as a member of the Software Factory.

“Right now, I’m living the best of both worlds,” Masoud said. “I love coding, I love technology, and I love IT, but I love serving at the same time.”

“I’m still a military officer, but I’m an Army coder,” Masoud reflected. “That’s unheard of before.”

Masoud has been in the Army for 16 years, serving in both Reserve and active-duty roles. His previous experiences as a Soldier include working as a cryptologic voice interceptor, a signal officer, a civil–military relations and a civil affairs officer, as well as completing deployments to Iraq and Afghanistan. He is the first civil affairs officer to have been selected from the Army Special Operations Forces community to join the Software Factory.

Now that he has finished the classroom portion of the program, Masoud looks forward to “working on very complex projects that will bring value to Soldiers, to the Army, to DoD and our country.”

“I want to be part of creating software tools that will save lives, will add value, will save time for Soldiers and just make their work better over time,” he said. 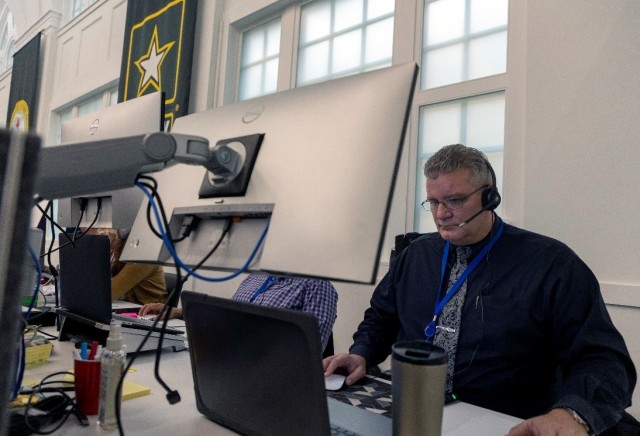 As a former Soldier and current Department of the Army civilian, Lawrence Eckles, 56, is familiar with the opportunities and constraints presented by legacy Army IT systems.

During his early deployments, “the intelligence we got was usually about four days old,” he said. Thankfully, “the digital systems the Army uses now are much more responsive,” providing information within minutes instead of days.

Eckles, who is from Cleveland, Ohio, and joined the Army at 17, left active duty in 2002 due to medical reasons but still felt the urge to serve. “I wasn’t finished yet,” he said.

He went on to serve as a contractor for the Army, eventually joining the DA in 2017 as an IT specialist.

He is now one of the first five DA civilians to have joined the Army Software Factory.

“What they’re trying to do here — getting applications in the hands of Soldiers within a matter of months — is amazing, and it’s never been done before,” Eckles said.

He added that he has “felt very welcomed” to the team, which has helped “set the standard for what we are going to do next.”

“I’m just really, really grateful to have this opportunity and grateful to everyone who has laid the groundwork for this,” Eckles said. 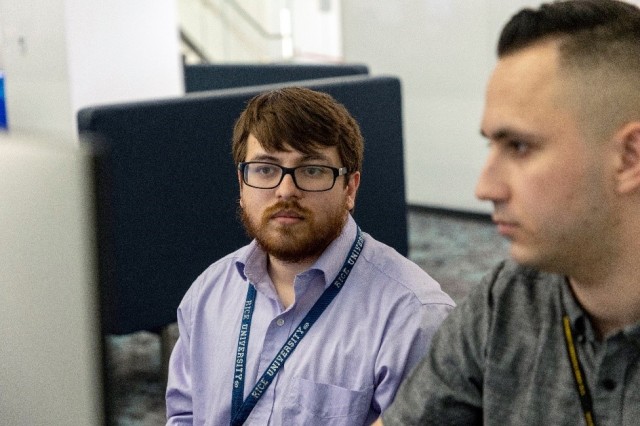 Andrew Graham, 26, is a DA civilian who worked as a computer engineer for the Army for four-and-a-half years before joining the Software Factory.

He was based out of Aberdeen Proving Ground, Maryland, when he saw the announcement for the program and jumped at the opportunity to learn additional software skills while experiencing life in Austin.

Graham, who grew up in the suburbs of Oklahoma City and received an electrical engineering degree from Rice University, has enjoyed the mix of learning and contributing to learning that he has been able to partake in at the Software Factory.

As a former League of Legends amateur tournament organizer, a job that involved “a lot of people asking the same question over and over again,” he also understands the importance of clear guidance. He has been able to apply that understanding to his role at the Software Factory, where having helpful software development instructions is essential for learning, conveying and preserving information.

During his time at the Software Factory, Graham has observed the benefits of having both Soldiers and DA Civilians present. “You need to make sure you’re not making echo chambers or silos and are bringing in other perspectives,” he explained.

Graham looks forward to the hands-on aspects of Phase 2 and hopes to play an integral role in further Army initiatives, including by continually exploring the question of “What’s the best thing we can do for bettering the whole Army?” 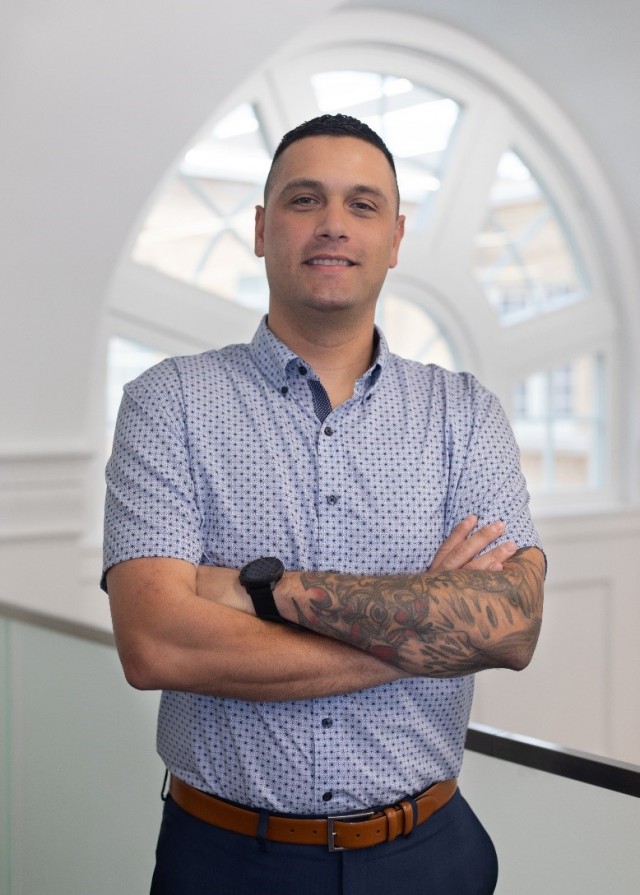 Staff Sgt. Aaron Lawson, 34, joined the Software Factory after working as a unit logistics specialist for the Army.

A native of San Antonio, Lawson lived in Texas and Georgia with his grandfather, a command sergeant major, before joining the Army at 17.

He served on active duty for a number of years before transitioning to a Reserve role and working as a software developer and integrator for a private company. However, he soon found that he “really missed being with Soldiers and wearing the uniform every day,” so decided to rejoin the Army as an active-duty Soldier.

Lawson sees the Software Factory as offering a compelling blend of his interests as a Soldier and as a software developer. He also has firsthand experience with some of the Army’s existing software systems and is eager to learn the tools to help improve them.

Thus far, he has been very pleased with the journey toward that aim.

“I’m incredibly impressed and extremely proud to work with everyone here at the Software Factory,” Lawson said.

He has found the Software Factory’s culture to be “very inviting,” and describes its efforts as highly impactful and rewarding.

“I love being a Soldier and doing things for Soldiers,” Lawson said. 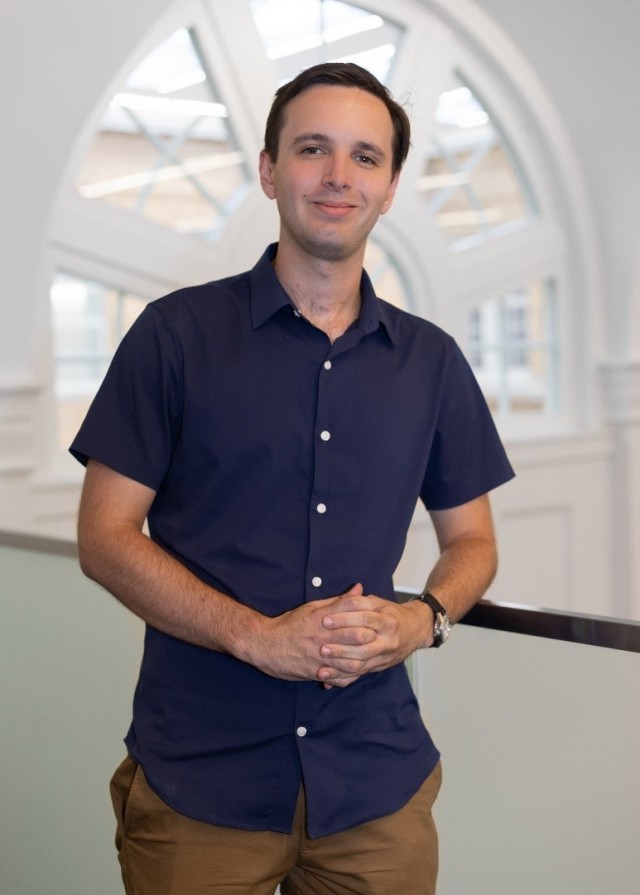 DA Civilian Stephen Scott, 25, had never lived outside of New Jersey before moving to Austin earlier this year to join the Software Factory.

He learned about the chance to get more involved in furthering Army software development while working as a weapons systems software engineer at Picatinny Arsenal, New Jersey.

“I was always interested in technology in general,” Scott said, sharing that he was a member of his high school’s robotics team before studying computer science in college.

He was inspired to apply to the Software Factory after reading a description of the program in an email and remembers thinking “that would be a cool experience; that’d be a good way to learn, a good way to build my skillset and have an immediate impact.”

“It’s a very different type of programming,” Scott said of the app-focused programming he is learning. He added that “everyone has completely different backgrounds and different skillsets coming in, which I think is a good thing.”

“I have learned a lot, and I definitely feel like my overall knowledge of skills has drastically improved over the past few months,” Scott shared.

Josh Farrington, 29, is a DA Civilian who comes to the Army Software Factory from Redstone Arsenal, Alabama, where he worked as a software developer for the Aviation Mission Planning System.

Born and raised in Huntsville, Alabama, Farrington was familiar with the defense community growing up. He joined the DA after graduating from college with a degree in industrial and systems engineering.

Farrington views the Software Factory as providing a valuable opportunity to expand his software programming experience while also working more closely alongside Soldiers and experiencing life in Austin.

He added that he was “really drawn by the ability to work directly with Soldiers,” explaining that the Soldiers he works with frequently provide helpful insights into the ways in which certain technologies would be useful in the field.

“It has made it more real, the impact I’m having as a DA civilian,” Farrington said.

The Army Software Factory acknowledged the achievements of Lee, Masoud, Eckles, Graham, Lawson, Scott, Farrington and the remaining members of Cohort 2 during a Dec. 17 recognition ceremony in Austin, which marked the transition from the cohort’s classroom learning phase to a hands-on training stage.